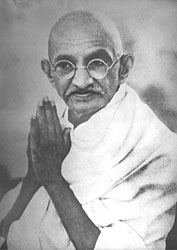 There are many causes I would die for. There is not a single cause I would kill for.

I object to violence because when it appears to do good, the good is only temporary; the evil it does is permanent.

If we were to drive out the English with the weapons with which they enslaved us, our slavery would still be with us even when they have gone.

If one has no affection for a person or a system, one should feel free to give the fullest expression to his disaffection so long as he does not contemplate, promote, or incite violence.

That which looks for mercy from an opponent is not non-violence.

In the secret of my heart I am in perpetual quarrel with God that He should allow such things [as the war] to go on. My non-violence seems almost impotent. But the answer comes at the end of the daily quarrel that neither God nor non-violence is impotent. Impotence is in men. I must try on without losing faith even though I may break in the attempt.